Number of international landlords in the UK's PRS rises

With rental property in the UK in such high demand, it’s interesting to know that the proportion of international landlords who own buy-to-let properties in the UK has risen in the first ten months of 2019. That’s the first time this has happened since 2010 and suggests overseas property investors are taking advantage of a weaker British pound.

According to research by global property management firm Hamptons International, the proportion of landlords based overseas rose to 11% between January and October 2019 compared with the same period in 2018. A year earlier, international landlords made up 7% of all landlords across the UK – the lowest proportion since this research series began in 2010.

US-based landlords rise by the most

While landlords from Western Europe make up the largest percentage of overseas landlords operating in the UK, landlords from North America increased by the most since 2014. Thanks to the strength of the US dollar against the pound, buying property in the UK with dollars resulted in a 23% saving compared with buying a property worth the same amount in 2014. 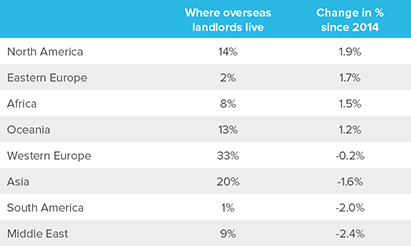 Indeed, analysis from the property management firm shows that even with if US-based investors buy more than one UK BTL property, the strength of the dollar more than compensates for the additional 3% stamp duty charge on multiple property purchases.

Meanwhile, the research also shows that London and the East of England are the areas where overseas landlords are most active:

The lowest proportion of overseas landlords are in Wales and the midlands:

“The proportion of homes let by overseas based landlords rose for the first time in more than nine years. The East and London recorded the biggest increases,” said Aneisha Beveridge, Head of Research at Hamptons International.

“Sterling’s depreciation has made investment property in Great Britain more attractive to international investors. The average home cost 23% or £53,065 less than in 2014 for a US dollar buyer, solely due to the currency changes,” Ms Beveridge added.

While any increase in rental property is a positive development in the UK, particularly at a time when demand for that tenure of property is still on the rise, many tenants across the UK are experiencing higher rents.

The average UK rent rose by 2.2% to £999 per month in October, from a year earlier. The regional breakdown shows that rents rose in seven of the eight regions. The strongest gains were in the south and east London, followed by the south west and Greater London. The one region where average rents fell was the north – this was the first decline in rents in that area since May 2018, according to Hampton International’s data.

While tenants may benefit from a slight rise in availability of rental properties, overseas landlords in particular need to be certain their investment is a sound one. In some cases, this might be one of the reasons rents are rising. However, for other landlords, there are other ways to safeguard their rental income, including the use of rent guarantors.

By using a rent guarantor service, like ours, landlords can remove the family element from the process and keep it on a business footing. This is something that would likely be a good fit for many overseas landlords considering growing their portfolio in the UK at a time when currency values are very much in their favour.