Where are the next BTL investor hotspots?

As a property investor and Buy-to-Let (BTL) landlord, its often difficult to know where the next potential hotspot for your next investment is. Luckily, there's some new research identifying areas where investors are likely to make their next purchase and it looks as though the midlands and north of England are looking pretty popular. Meanwhile, investments are still likely in London and the south, but at a slower rate than the more affordable northern regions.

According to research conducted by BVA BDRC for Paragon, some 14% of all landlords are planning to expand their portfolio with an average of three new purchases during 2020. And the likelihood of buying a new BTL property increases among portfolio landlords who already have a notable number of investments in the industry.

Meanwhile, south west England and central London are home to the weakest level of anticipated demand among BTL landlords; just 8% of landlords in the south west said they intend to buy a property, followed by 9% in London. 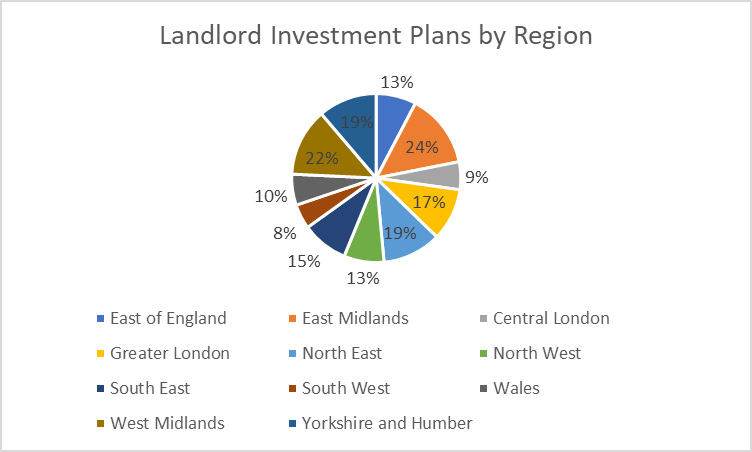 In addition, the data highlights the desire to make further investments is stronger among those who already have a larger number of BTL properties. Some 8% of landlords who own one property said they planned to make further purchases in 2020. That rose to 20% among landlords with 20 or more properties.

“The proportion of landlords looking to purchase new property has been largely consistent over the past two years, but we are seeing regional variations and also a greater propensity for portfolio landlords to invest in property,” said Paragon’s managing director of mortgages, Richard Rowntree.

Among those landlords who are planning to grow their BTL portfolio, over half of them said they are ideally targeting investment in terraced housing. Semi-detached properties are the second most popular for investment plans, followed by flats.

It’s also interesting to note that 25% of landlords who intend to buy more BTL properties said they would prefer to purchase a Home of Multiple Occupation (HMO). It’s likely these types of properties have become more popular as an investment due to the higher yields typically available on them across most parts of the UK.

“Portfolio landlords have adopted a number of strategies to adapt to the tax and regulatory changes of recent years and we’re seeing trends such as these landlords buying stock from smaller-scale participants as they exit the market, or targeting higher yielding properties, such as HMOs,” he added.

It appears then, that although some landlords are being put off by the new regulations that are affecting their BTL income, there remains a strong appetite to expand existing portfolios across the UK.